When will they stop fighting each other and start fighting for her? 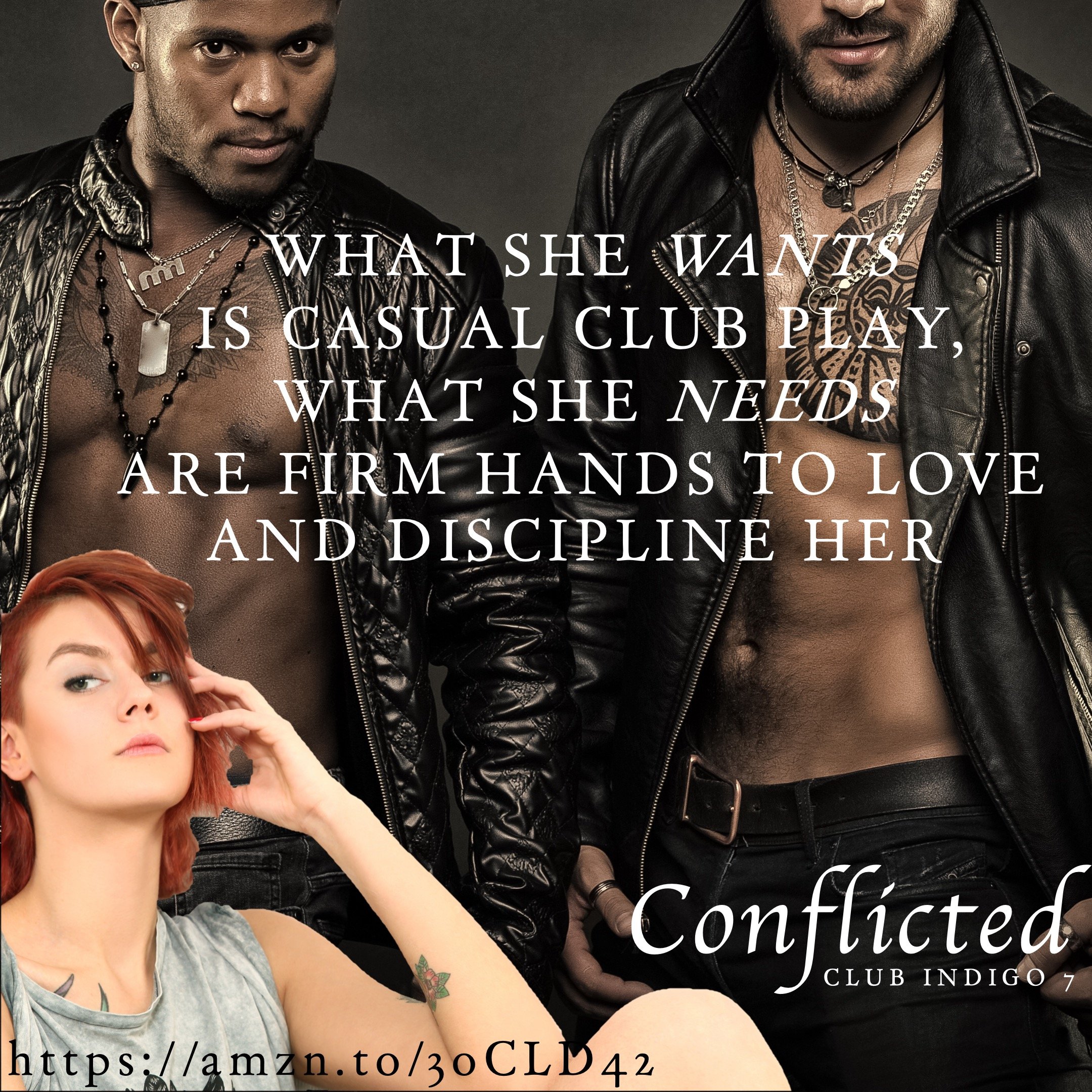 Ruby toyed with her lip piercing. She couldn’t imagine herself engaging in a full-time relationship with a Rope Top, like her best friend. Which made her think about her relationship with Will. Ruby liked him very much, but Will was learning to be a Bakushi, like GT. ⁠

Ruby ambled over to the bar, where Bob was performing his favorite duty. ⁠

“Good evening. What can I get you?” His bearded face split into a wide grin.⁠

“Good evening, Bob. For now, I would love a glass of red wine,” Ruby answered.⁠

Bob arched an eyebrow. “For now?” He placed his forearm on the bar top and leaned forward. “Consider me intrigued.”⁠

Ruby threw back her head and laughed. “Do you feel like topping or bottoming, tonight?”⁠

“Hmm,” he elongated the sound and grinned. “Let’s assume I’m in a dominant mood. That would place your behavior in the topping from the bottom category, now wouldn’t it?”⁠ 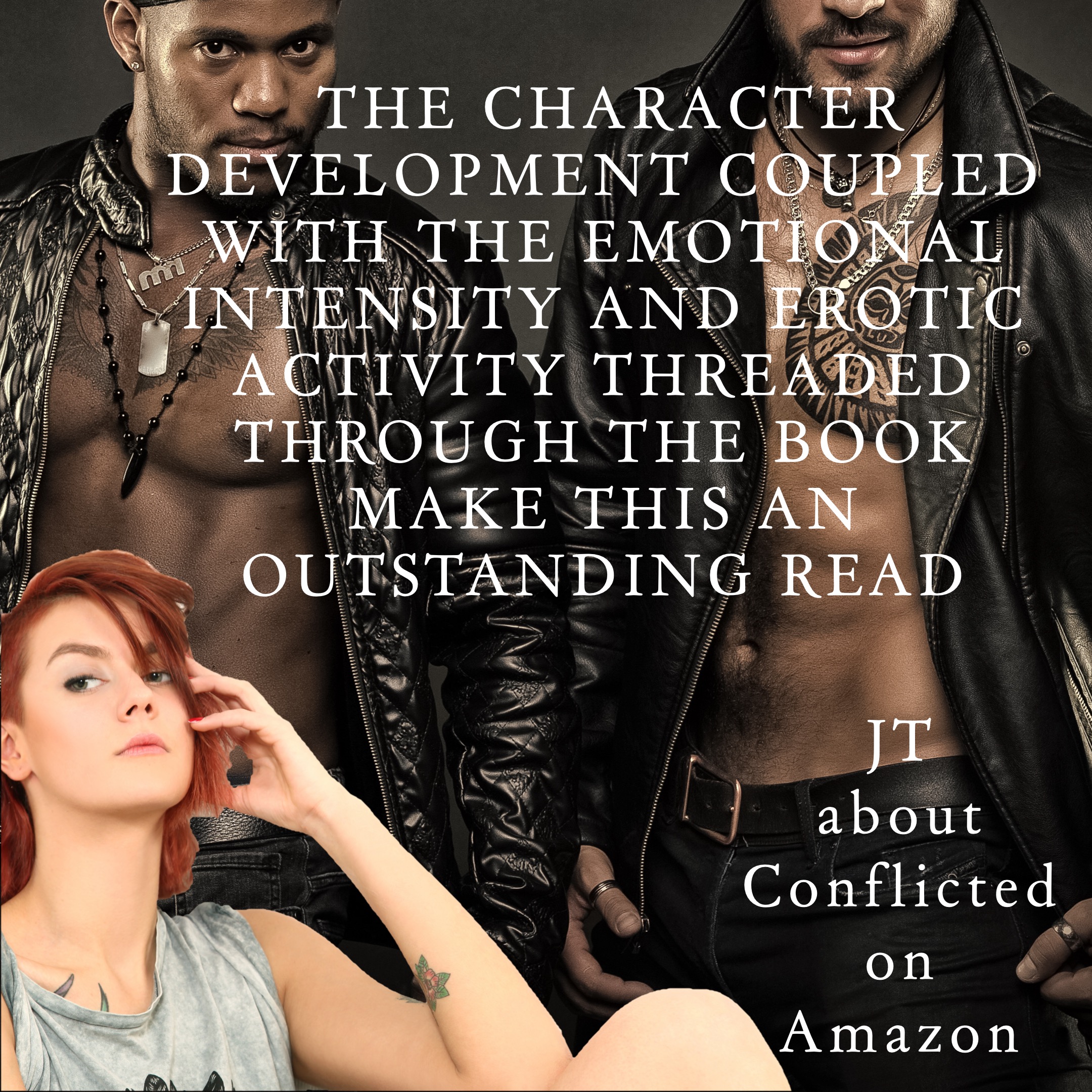 JT gave Conflicted 5.0 out of 5 stars on Amazon⁠

What do others say?

Ruby is a submissive at Club Indigo. She has scened many times with Will, but he is mostly a rope master, but Ruby wants more than that. Then she meets Nathan at a munch and she is interested. She continues to scene with Will and starts scening with Nathan. When they find out about each other, they become possessive over Ruby and she decides to stop scening with them both. Nathan and Will need to get over their jealously of each other if they want to be with Ruby. I enjoyed this story and I am looking forward to more Club Indigo stories. - Marybeth Goodreads Reviewer ⭐️⭐️⭐️⭐️

Ruby has been a member of Club Indigo for quite a while. Lately she's played with Will quite often. She has feelings for him, but if all he wants to do is play she's okay with that for now One night a new guy walks in. Wow he's gorgeous and once they play together she realizes she would like to play with him again. Only problem is, they can't stand each other. Things in her life are very confusing right now and she just needs them. Can they do it? As usual, this Club Indigo book is good. Hot read. – Lori Goodreads Reviewer ⭐️⭐️⭐️⭐️⭐️

This is the 4th book I've read written by Karen Nappa; she has done a great job at writing a good book; I can’t wait to read more of her books. The story line caught my attention at the very beginning and kept me interested throughout the entire book. Tammy Goodreads Reviewer ⭐️⭐️⭐️⭐️

I love that we get back to Club Indigo to meet old and new characters and I loved that we got to know Ruby’s story as she comes to terms with the relationships between herself and her parents and and as well as her own with Dominates Will and Nathan.

Welcome back to club Indigo, it’s so good to see everyone again! This time,it’s Ruby standing in the spotlight,and i’m glad to hear her story. Because that girl deserves her hea, even if she didn’t think she’d ever get one. Not with an absent father, leaving her mother raising her alone. Leaving her with a lack of trust in anything permanent...... On top of the struggle her mother is going through after she’d been mugged, Ruby’s spermdonor keeps sending Ruby letters, trying to reach out. If only he’d taken his responsibility when her mother was pregnant, all this would never have happened.... His latest attempt means they have a lot of money now, plus it means Ruby hears her mother’s side of the story. And that means hearing things she didn’t expect...... In the meantime, at club Indigo,she enjoys playing with Master Will,who knows his way around ropes. But she needs more than that,and after meeting a new Master,Nathan,she finds what she’d been looking for. Only, Will and Nathan know eachother,and their history is not pretty,so when Will sees her with Nathan he explodes. Fighting it out over her head is not only stupid, it hurts Ruby! It’s a good thing she has friends that look out for her.....and one of them,Bob (a psychologist) rescues her from the two angry alphas. Once Bob has a good chat with Will and Nathan, they form a team though,and guess who they’re going after.... They still have their issues though, all three of them,and until they talk about them,the whole arrangement could end up in disaster. At least there’s progress in finding the mugger. And she’s finally getting to know her father. If only she could have both Will and Nathan, too..... Having the privilege to see every story grow from start to finish, is such a pleasure, and I hope to see many more. Because there is such beauty in them. You can feel the love for every person. The intimacy. The care. And I love it! - cécile smits BookBub reviewer ⭐️⭐️⭐️⭐️⭐️

A very enjoyable read, great story and wonderful characters Ruby is a wonderful character in this book and you will be totally engrossed by the storyline and also on the details regarding characters I have read about in previous books and this all added to the book. Ruby is a submissive that enjoys being a member if the Club Indigo in an environment where submissive are able to experience their kinks in a safe and consensual place with Dom’s and also enjoy the security of knowing there are people ensuring that partnerships are going well whilst at the club. Ruby has been scenes regularly with Will and the starts to have sessions with a new member Nathan and it is apparent that this is causing tension between the three of them, they are also becoming possessive and this is something she dislike so stops with both Dom’s. Nathan and Will have to realise that they will have to overcome their jealously otherwise they will lose Ruby and the possibility of a permanent relationship. I voluntarily received and review an Advanced Reader Copy I thoroughly enjoyed the book and look forward to reading any future publications; keep up all the great writing – Sue B BookBub reviewer ⭐️⭐️⭐️⭐️⭐️

Ruby has been a member of Club Indigo for quite a while. Lately she's played with Will quite often. She has feelings for him, but if all he wants to do is play she's okay with that for now One night a new guy walks in. Wow he's gorgeous and once they play together she realizes she would like to play with him again. Only problem is, they can't stand each other. Things in her life are very confusing right now and she just needs them. Can they do it? As usual, this Club Indigo book is good. Hot read. L. Williams Amazon Reviewer ⭐️⭐️⭐️⭐️⭐️

This is the 7th book in the series but it can be read as a stand-alone. Ruby loves to play at Club Indigo and Will and Nathan both give her what she needs but can they share her? Fast-paced read with sizzling scenes, loads of drama, emotion and steam. I liked it. – TS Amazon Reviewer ⭐️⭐️⭐️⭐️

Can they set aside their mutual dislike to give her what she needs?⁠

Sassy and independent Ruby doesn't trust men, but she enjoys playing at Club Indigo. She revels in the thrill and attention, whether it's doing a scene with switch Bob or getting tied by Bakushi Will. When a new Master joins the club, she is instantly attracted to the African American hottie but also conflicted.⁠

Can she trust a man to choose her and what if she can't choose herself? Does she have to?⁠ 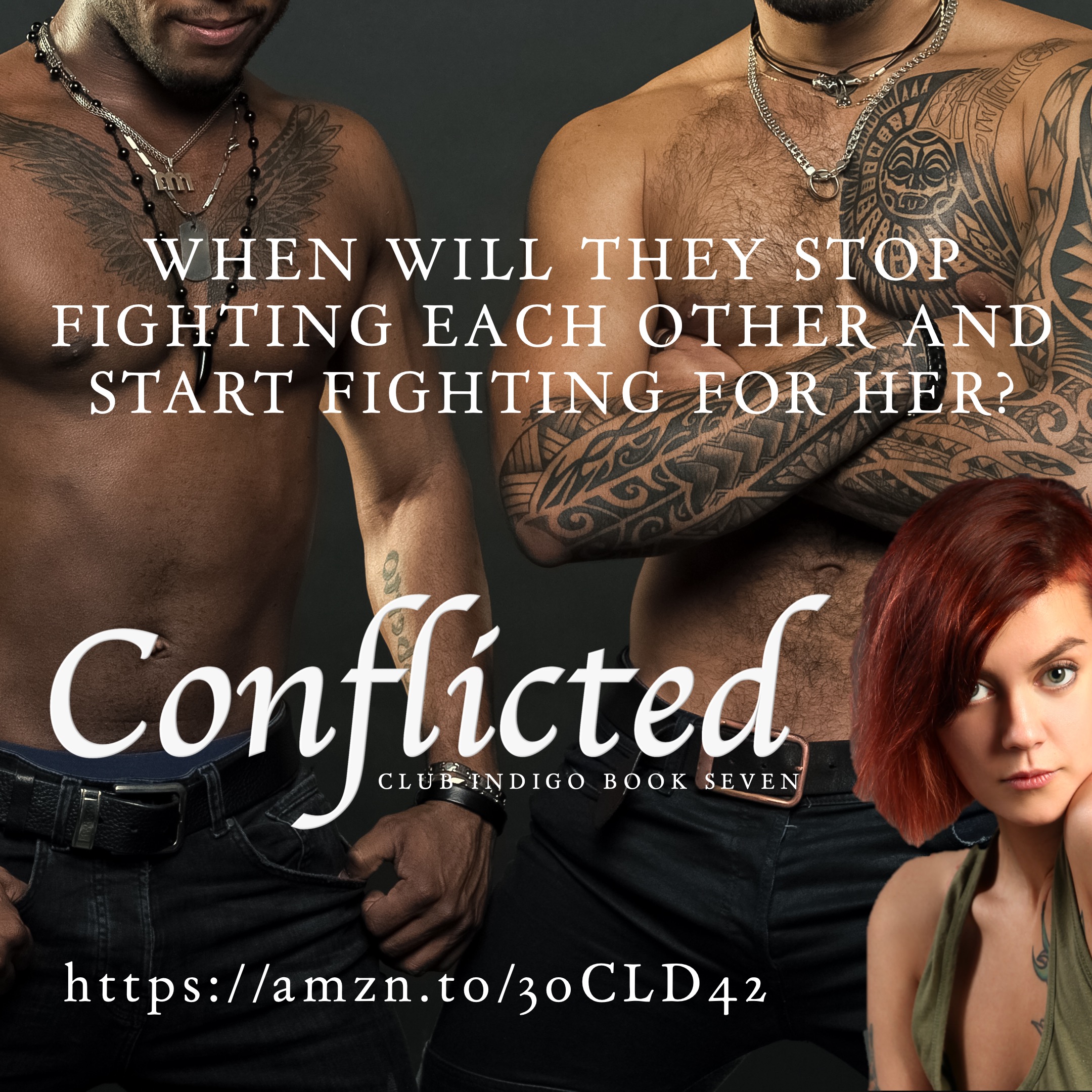 Recently, AllAuthor published an interview with us.
Snippet: Karen Nappa is a bi-continental writing team. They met online on Goodreads. They write seasoned romance because they are both past forty and they wanted to read about characters more like them. They create stories that are more than just about “fun”. Their novels are fast-paced read with lots of steam and emotion.