Marked and Ruined: A Games of the Underworld Novel Kindle Edition

Book 4 of 14: Games of the Underworld

How could I have fallen so low?

I was the queen’s shadow, the second highest ranking vampire in clan Disaris. Nothing happened without my knowledge. Kiara was my queen and my twin sister. I would kill for her in an instant.

So when I discovered an assassination attempt by two rival clans, I did what anyone else would for their sister. I took the hit. The assassins missed her but got me. And as I lay bleeding out, I welcomed death, but found life instead.

Spencer Auvrey. The man who found me and got my heart pumping in more ways than one.

Saved by a human. I owe him my life, but letting him join me on my quest for vengeance will ultimately ruin him.

Who knew falling so low could leave me feeling so high?

MARKED AND RUINED is one of fifteen books within the Games of the Underworld shared universe. It is a standalone novel which can be read independently, but to get the full story, it is highly recommended to read all of the books within the series. 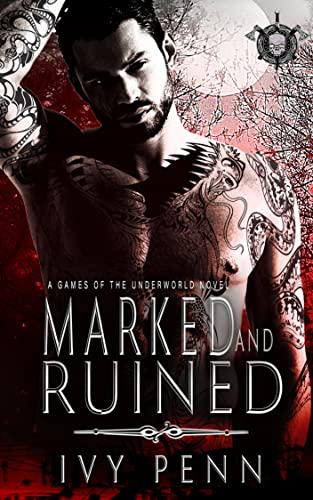 Ivy is a free-spirit who loves life and hates looking back. Every experience in our life is there to help us grow - she grew up with her grandparents as an only child, and always dreamed of having siblings. Being an only child sucked as there was never anyone to play games with, so she would make up unique characters to play against and amuse herself. What began with Star Trek, horror movies and historical romance novels took root and grew into writing short stories and poems. Growing up near a large city, it was hard to see the stars. Ivy knew they were there, and that the stars hold a special place for everyone. It's where we look up and wish. Growing up, it was Ivy's dream to write romances that would transcend the imagination.

She writes it all! She used to be known as Lilith Adams/Aeryn Zaera, but now it's all merged and ALL Ivy. From love that takes you to the stars to a world where peace is achievable. To contemporary, paranormal romance and everything in between packed with plenty of spice. After all, all love stories bloom from the same garden even if you’re the odd kid out! It took a long time for her to figure out who she was inside, but now that she knows, there’s no stopping her. Her goal is to bring normal, everyday people to life in adventures that are fun and sometimes out of this world while showcasing the magic that can happen when you're true to yourself.